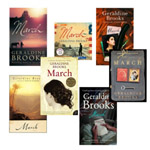 Geraldine Brook's second novel is in every important way less accomplished than her first, Year of Wonders (2001). That book, which dealt with the assaults of plague on a 17th-century English village, derived some of its power from the way its resourceful heroine came to suspect the biological essence of the calamity she was up against: ''Perhaps the Plague was neither of God nor the Devil, but simply a thing in Nature, as the stone on which we stub a toe.'' Fearlessness - and experimentation with herbs - saw her through and won a reader's respect. In March, the ferocious nemeses conjured by Brooks are war and slavery, which, unlike impersonal disease, end up prompting the author and her characters toward a prolonged moral exhibitionism.
Thomas Mallon - New York Time.  Published:  March 27, 2005

Brooks has taken a chance in evoking it so strongly at the end, but the chance pays off beautifully. March is an altogether successful book, casting a spell that lasts much longer than the reading of it.
Karen Joy Fowler - Washington Post.  Published:  March 13, 2005

Brook’s luminous second novel, after 2001's acclaimed Year of Wonders, imagines the Civil War experiences of March, the absent father in Louisa May Alcott's Little Women. An idealistic Concord cleric, March becomes a Union chaplain and later finds him assigned to be a teacher on a cotton plantation that employs freed slaves, or "contraband." His narrative begins with cheerful letters home, but March gradually reveals to the reader what he does not to his family: the cruelty and racism of Northern and Southern soldiers, the violence and suffering he is powerless to prevent and his reunion with Grace, a beautiful, educated slave whom he met years earlier as a Connecticut peddler to the plantations. In between, we learn of March's earlier life: his whirlwind courtship of quick-tempered Marmee, his friendship with Emerson and Thoreau and the surprising cause of his family's genteel poverty. When a Confederate attack on the contraband farm lands March in a Washington hospital, sick with fever and guilt, the first-person narrative switches to Marmee, who describes a different version of the years past and an agonized reaction to the truth she uncovers about her husband's life. Brooks, who based the character of March on Alcott's transcendentalist father, Bronson, relies heavily on primary sources for both the Concord and wartime scenes; her characters speak with a convincing 19th-century formality, yet the narrative is always accessible. Through the shattered dreamer March, the passion and rage of Marmee and a host of achingly human minor characters, Brooks's affecting, beautifully written novel drives home the intimate horrors and ironies of the Civil War and the difficulty of living honestly with the knowledge of human suffering.
Publishers Weekly.  Reviewed on:  December 20, 2004

In Louisa May Alcott's Little Women, readers see a perfect, self-sacrificing, loving, close-knit family. Brooks here concentrates on the absent father. Referring to him as simply March, Brooks creates a picture of his struggle with his not-so-perfect life during his tour of duty as a chaplain on the Civil War battlefields of Virginia. What emerges is the complex conflict of a man of principle who must adjust to fit the reality he encounters. March wrestles with hatred, evil, violence, ignorance, rage, lust, illness, and competing loyalties, from both outside himself and within. The author's extensive research provides the details of time and place that make this tale so compelling. Richard Easton's delivery is flawless-the characters are complex, their encounters, realistic. Recommended.
Joanna M. Burkhardt, Coll. of Continuing Education Lib., Univ. of Rhode Island, Providence - Library Journal.  Published:  September 15, 2005

Brooks combines her penchant for historical fiction (Year of Wonders, 2001, etc.) with the literary-reinvention genre as she imagines the Civil War from the viewpoint of Little Women's March (a stand-in for Bronson Alcott). In 1861, John March, a Union chaplain, writes to his family from Virginia, where he finds himself at an estate he remembers from his much earlier life. He'd come there as a young peddler and become a guest of the master, Mr. Clement, whom he initially admired for his culture and love of books. Then Clement discovered that March, with help from the light-skinned, lovely, and surprisingly educated house slave Grace, was teaching a slave child to read. The seeds of abolitionism were planted as March watched his would-be mentor beat Grace with cold mercilessness. When March's unit makes camp in the now ruined estate, he finds Grace still there, nursing Clement, who is revealed to be, gasp, her father. Although drawn to Grace, March is true to his wife Marmee, and the story flashes back to their life together in Concord. Friends of Emerson and Thoreau, the pair became active in the Underground Railroad and raised their four daughters in wealth until March lost all his money in a scheme of John Brown's. Now in the war-torn South, March finds himself embroiled in another scheme doomed to financial failure when his superiors order him to minister to the "contraband": freed slaves working as employees for a northerner who has leased a liberated cotton plantation. The morally gray complications of this endeavor are the novel's greatest strength. After many setbacks, the crop comes in, but the new plantation-owner is killed by marauders and his "employees" taken back into slavery. March, deathly ill, ends up in a Washington, DC, hospital, where Marmee visits and meets Grace, now a nurse. Readers of Little Women know the ending. The battle scenes are riveting, the human drama flat.
Kirkus Reviews.  Published:  January 1, 2005

One Book, One Community of Monroe County