The ribbon cutting was the culmination of a 2-year, $16.1 million project financed by the college over 20 years that has completely transformed the way it heats and cools most of its buildings on its Main Campus, while providing major cost and environmental benefits.

The geothermal-based system will result in significant energy cost savings for MCCC, has a 50-year lifespan on its well field that is double that of a conventional system and will greatly reduce the college’s carbon footprint.
Ameresco, Inc., a leading energy efficiency and renewable energy services provider, was the engineer and general contractor for the project.

The La-Z-Boy Center and Gerald Welch Health Education Building, which were built more recently – in 2004 and 1996, respectively – have conventional HVAC systems with time left on their lifespans; they will be added to the geothermal-based system once their current systems are in need of replacement.  The Career Technology Center, built in 2013, already has its own geothermal-based HVAC system.

Geothermal-based HVAC brings the buildings into harmony with the earth beneath by taking advantage of subterranean temperatures to provide heating in colder-weather months and cooling in warmer-weather months, said Jack Burns, director of campus planning and facilities at MCCC, who oversaw the project.  Outdoor temperatures fluctuate with the changing seasons; however, underground temperatures do not change as dramatically because of the insulating properties of the earth, he said.  MCCC’s new system uses a buried system of pipes, also known as an earth or distribution loop, to capitalize on these constant temperatures to provide “free” energy to the buildings.

“Essentially, we are using water that has been heated or cooled by the earth’s energy to a temperature that requires less additional energy to heat or cool it to acquire specific comfort levels, depending on the season,” Burns said.

The well field that supplies the distribution loop is comprised of 288 wells that are 350-400 feet deep, Burns said.  The rectangular field sits on a 3-acre piece of land that is located on the extreme southeast portion of MCCC’s Main Campus.  MCCC’s system is a closed-loop system that does not pump any ground water in or out, Burns said; rather, it was supplied by 10,000 gallons of water that were pumped in from the college’s connection to the city water system.

Through its contract with Ameresco, the college is guaranteed to reduce its previous yearly energy consumption by about 160,000 kilowatt hours annually.  It is also guaranteed to save about $5.55 million in electricity, gas and water costs over the next 20 years or an average of $275,000 per year.

But the system will likely save far more than that, according to Suzanne Wetzel, MCCC’s vice president of administration.
“We fully anticipate that our energy savings will surpass the $5.55 million over 20 years that Ameresco has guaranteed,” she said.
In addition to the cost savings of the geothermal system and its long life-cycle, it provides substantial environmental benefits.

According to Ameresco, MCCC will reduce its carbon emissions by 1,068 metric tons per year.  Based on the Environmental Protection Agency’s Greenhouse Gas Equivalencies Calculator, the annual green benefit from this reduction each year is equal to:

“This was an investment in the present and future of MCCC,” said Lynette Dowler, chair of MCCC’s Board of Trustees.  “The geothermal-based HVAC system provides state-of-the-art, sustainable energy creation to maintain a comfortable environment for teaching and learning.  It will serve us well environmentally and financially for many years to come.”

“This geothermal asset has a 50-year lifespan on its well field; a conventional upgrade would have lasted less than half that,” said MCCC President Dr. Kojo A. Quartey.  “Going geothermal will lower our annual energy costs, save us additional money far into the future because of its long system lifespan, and reduce our carbon footprint year after year.  It’s a win-win-win for our college and community now and for many decades to come.”

Some other site-specific features of the geothermal-based HVAC system include mechanical upgrades, such as new water-to-water central chiller cooling/heating plants for 1) the Campbell Learning Resources Center and East and West Technology buildings, 2) the Warrick Student Services/Administration Building, and 3) the Life Sciences Building, each with capacities of 612, 459 and 286 tons, respectively; a supplemental boiler for the geothermal distribution loop; 10 new air handling units; upgrades to electrical switchgear, transformers and subpanels, and the installation of new electrical meters.

In addition, an automated HVAC control system was installed as part of the project that controls not only the geothermal-based system, but also the other conventional campus systems.  This was installed at both the Main Campus and Whitman Center in Temperance and offers a user-friendly interface, Web-based access, remote monitoring, and automated alarms and alerts. 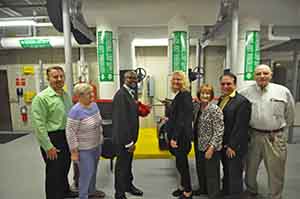 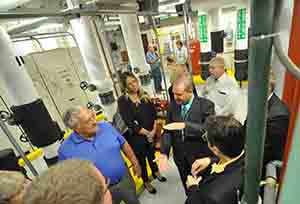 Founded in 1964, Monroe County Community College is a public, two-year institution supported by tax monies from Monroe County, educational funds from the State of Michigan and student tuition.  The college’s mission is to enrich and transform lives by providing opportunities and excellence in higher education.

The Main Campus is located at 1555 South Raisinville Road, Monroe, Mich., 48161, with easy access to Toledo and Detroit.  The Whitman Center is located in Temperance, Mich., 48182, near the Ohio-Michigan Border.  Detailed information about MCCC is available at www.monroeccc.edu.