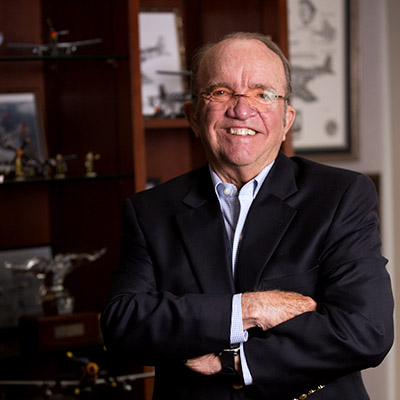 Jack Roush, an American motorsports icon and distinguished automotive entrepreneur who taught at Monroe County Community College roughly five decades ago, will make a short presentation at the college, as well as sign autographs and meet with students, staff and community members, on Thursday, Nov. 18 at 1:30 p.m.

The event, which is free and open to the public, will begin at 1:30 p.m. in the college's automotive lab with a welcome from MCCC President Dr. Kojo A. Quartey.

Following the event, Roush will take a tour of MCCC's campus led by Dr, Quartey, with a specific focus on the latest campus updates, such as the newly renovated Founders Hall.

According to the Rousch Enterprises website, Roush attended Berea College, graduating with a bachelor’s degree in mathematics, and later received a master’s in Mathematics from Eastern Michigan University in 1970. He was hired as a quality control engineer for the Ford Motor Company in 1964 and soon became acquainted with a group of employees who were campaigning drag racing cars called the “Fastbacks” In 1970, he formed his own team with partner Wayne Gapp. Roush and Gapp combined to win multiple championships in NHRA, IHRA and AHRA Pro Stock drag racing between 1970-75.

In 1984, Roush was commissioned by the Ford Motor Company to develop cars and engines for the SCCA Trans-Am and IMSA Camel GT racing series. Roush’s cars dominated the Trans-Am manufacturer’s championship for Lincoln-Mercury in 1985 and won an unprecedented 119 national events and secured 24 national championships between the two series. Roush further expanded his racing operations in 1988 when he established his immensely successful NASCAR team. To date, Roush-Fenway Racing has claimed two NASCAR Cup Championships, four NASCAR Xfinity championships and one NASCAR Truck Series title.

Roush has also made major safety contributions to stock car racing, including the development of roof flaps to prevent rollovers. In total, Roush has won over 400 national events and more than 30 championships across the numerous series of motorsports in which he has competed.

In addition to his racing successes, Roush is the founder and chairman of Roush Enterprises, a global supplier of product development services including design, engineering, prototyping, testing and manufacturing. The company serves the mobility, aerospace defense and theme park industries, developing ride systems for customers that include Disney and Universal Studios. Roush also oversees Roush Performance Products, a supplier of aftermarket performance parts, and Roush CleanTech, a manufacturer of alternative fuel systems.