A busy college football Saturday in November was not stopping top electrical apprentices from competing for the title of regional craft champion.

Ten Southeast Michigan Construction Academy (SEMCA) students spent the day participating in a contest that would test their skills as year three and four apprentices. Students were given blueprints for a complex electrical project to be completed in eight hours. All while under the watchful eye of SEMCA instructors who were judging the competition.

The winner this year was Gabe Roberts, a year three electrical apprentice at the Monroe County Community College (MCCC) location and currently working at Deere Electric in Tecumseh, MI. This was Robert’s first year competing and he was up against many worthy competitors. He will be heading to Kissimmee, FL in March to complete at the Associated Building and Contractors National Convention in March.

The SEMCA Electrical Apprenticeship program at MCCC in which Roberts participates will be hosting an Open House at 5:30 p.m. on Monday, December 5, 2022, on MCCC's main campus in Monroe. The Open House is a great opportunity for those who are interested in an electrical career to learn about the program that has brought Roberts so much success. The next course will begin January 3, 2023, at MCCC. To RSVP for the Open House visit bit.ly/SEMCA-Open-House. The application for the course can be found on www.semcaschool.org. 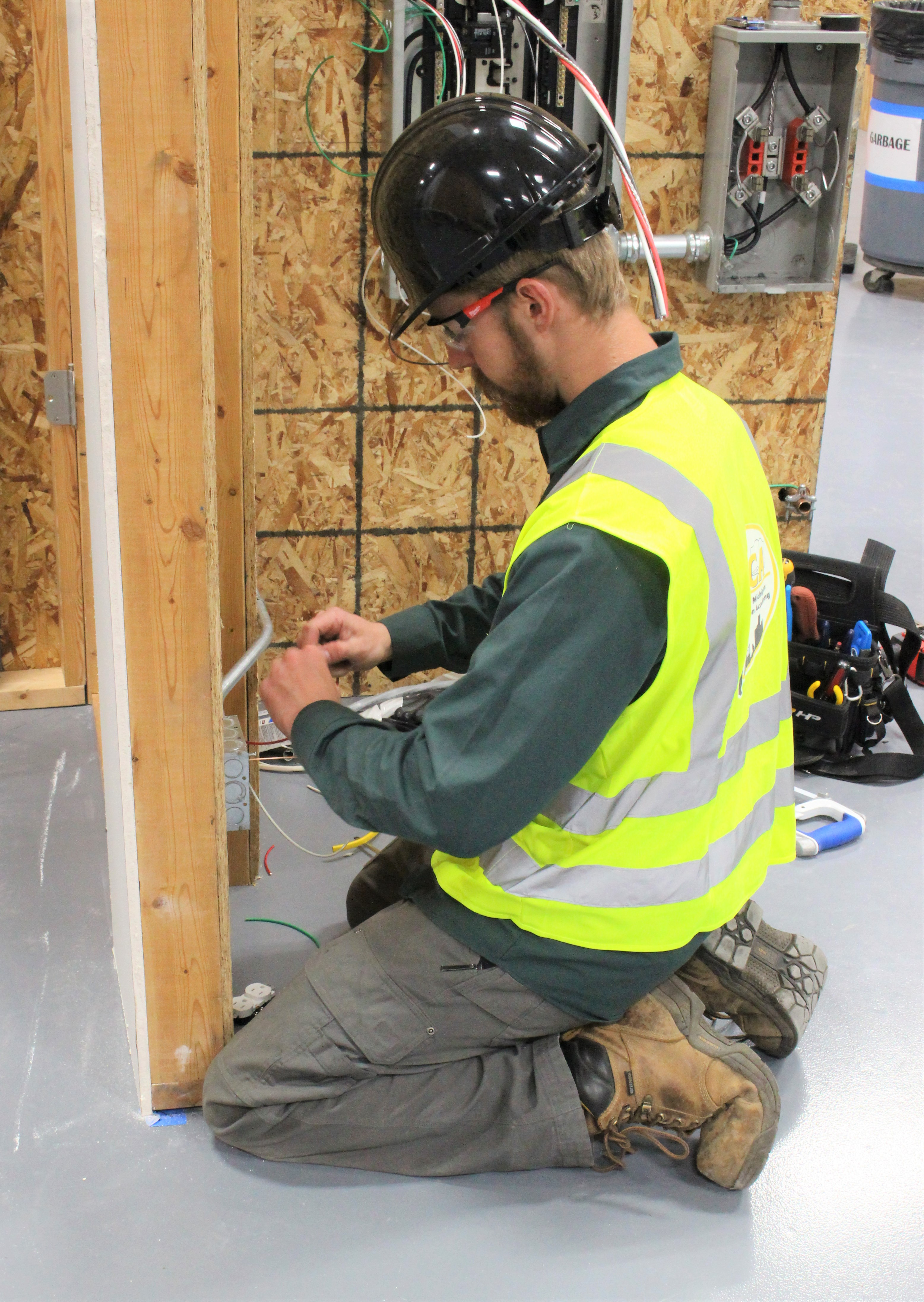 This year’s winner Gabe Roberts, a third-year Electrical Apprentice at MCCC's location of the Southeast Michigan Construction Academy and an employee of Deere Electric in Tecumseh, in action during the day-long competition. 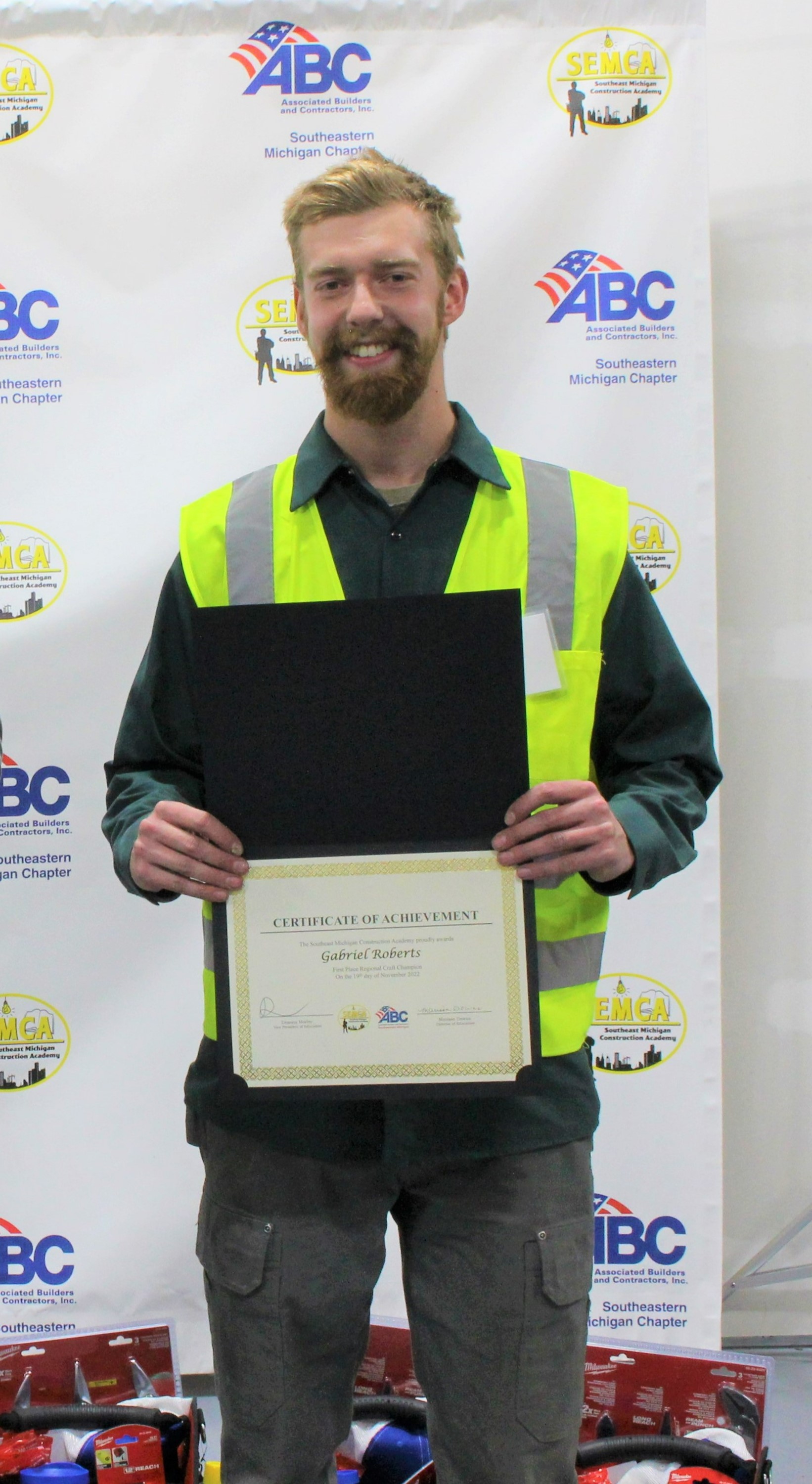 Gabe Roberts proudly holds his award as he advances to the National Craft Championship.

“It is such an honor to have won and to have my parents, fiancé and kids here to see it,” Roberts said. “Working on this project was one thing, but factor in the time constraints and the judges circling around you, just adds to the pressure, but it certainly made me want to work that much harder to impress everyone in that shop.” To be invited to participate in the competition, all “Year 3 and 4” students were asked to complete a rigorous written exam and the top 10 were selected to compete.

Roberts continued saying he is ready to take his skills down south and hopefully give a repeat performance. “My boss told me that if I won, he’s packing up and heading to Florida with me to cheer me on, Roberts said. “So that kind of adds to the pressure, but I’m up for the challenge.

Event coordinator and SEMCA instructor, John Danic noted that in previous years, one or maybe two competitors would complete their project – but this year, five competitors finished their project and were ready to have them tested.

“I am amazed at the dedication displayed by our students,” Danic said. “These guys have been working hard and I’m so glad to see we have five who finished this year.”

Marissa Downs, the director of education for SEMCA, said that this competition shows the kind of hard work students put in to make a successful career in the trades.

“I am so proud of each of the participants ,” Downs said. “No matter if they finished or not, they pushed